As many of our members who moved to Birmingham from other parts of the country began to express to the church leadership how much they missed access to the Moody Broadcasting Network, Briarwood began to investigate the possibility of building our own radio station so we might carry Moody’s programming. At first, we attempted re-transmitting the Moody network from a station in Chattanooga via low powered translators, but the weak signal proved ineffective.

So Tom Leopard, the church administrator at that time, began the tedious process of applying to the Federal Communications Commission for a broadcasting license. After 10 years of prayer and hard work, the FCC granted us a construction permit and the last education FM frequency in Birmingham. We began broadcasting February 20, 1998.

WLJR’s station is located in Briarwood Presbyterian Church, and the transmit antenna is located high atop Double Oak Mountain. The Lord blessed us with a great tower location! The signal has been heard an amazing 45 miles away from the tower, far better than anyone imagined with only 375 watts ERP. Late in 2013, WLJR became available on the internet. This now means the station can be heard in stereo around the world, 24 hours a day, seven days a week!

On September 1, 2016, we added American Family Radio to some of our schedule to offer an even greater variety of programs to the Birmingham community. This, along with our Briarwood App, launched in June of 2016, is providing even easier access to WLJR from everywhere in the world!

Funding has been (and is) provided by designated gifts and by members, one of whom was a handicapped member who wished to make our worship services accessible to those unable to physically attend Briarwood.

The Mission Statement for WLJR: WLJR radio is dedicated to glorifying God by providing consistent, quality Christian radio programming to the Briarwood congregation, the community and the world, via terrestrial broadcasting and the Internet.

The radio ministry is an important part of Briarwood’s mission statement to “Reach Birmingham to Reach the World for Christ.”

If you have any questions, or for more information, please contact Briarwood Presbyterian Church.

If you live or work within our coverage area, tune into 88.5 on your FM dial. 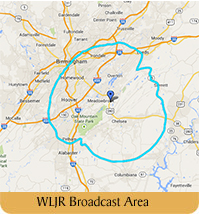 Radio not an option? Listen to WLJR programming live online any time and in stereo, too—anywhere you have an Internet connection. Go to playwljr.com, click the button below,

or use the BriarwoodPCA App, available in all the online app stores: