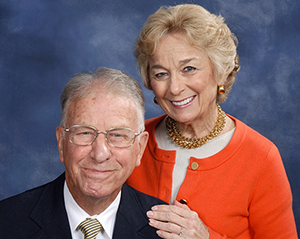 Frank M. Barker, Jr. retired as senior minister of Briarwood in 1999 but continues his association here serving as Pastor Emeritus. He currently heads the Department of Old Testament at Birmingham Theological Seminary.

Dr. Barker was born January 31, 1932 in Birmingham, Alabama. He graduated from Auburn University in 1953 with a BS Degree in Textile Engineering. After serving four years as a jet pilot in the United States Navy, he graduated from Columbia Theological Seminary with the Bachelor of Divinity and the Master of Theology degrees. In May of 1988 he received an honorary Doctor of Divinity degree from Reformed Theological Seminary.

He married Barbara Brown on November 3, 1961. The Barkers have three grown children and eight grandchildren. Mrs. Barker is in great demand as a speaker especially for women’s groups. Dr. Barker received the distinguished honor of Eagle Scout as a 14 year old.

Ordained in 1960 by Birmingham Presbytery of the Presbyterian Church in the United States, Dr. Barker became the Pastor of a recently gathered group of Presbyterians who were soon to be organized as the Briarwood Presbyterian Church. From a congregation of 35 members, meeting in a storefront building in 1960, Briarwood grew to a membership of over 4000.

In 1972 Dr. Barker was one of the “Committee of Forty” that laid the foundational structure for the formation of the Presbyterian Church in America, a denomination of Presbyterians committed to the inspiration, inerrancy and infallibility of Scripture. Beginning in 1973 with 250 congregations, the PCA has grown to over 1500 churches. The first and founding meeting of the General Assembly of the PCA was held at the Briarwood Presbyterian Church.

He is also an author, having written A Living Hope, a study guide on I Peter; The Gospel of John for Group Study; I Timothy: Pure Heart, Good Conscience, Sincere Faith and Encounter with Jesus.